Guidelines for the approximation of Ukrainian legislation to EU Law 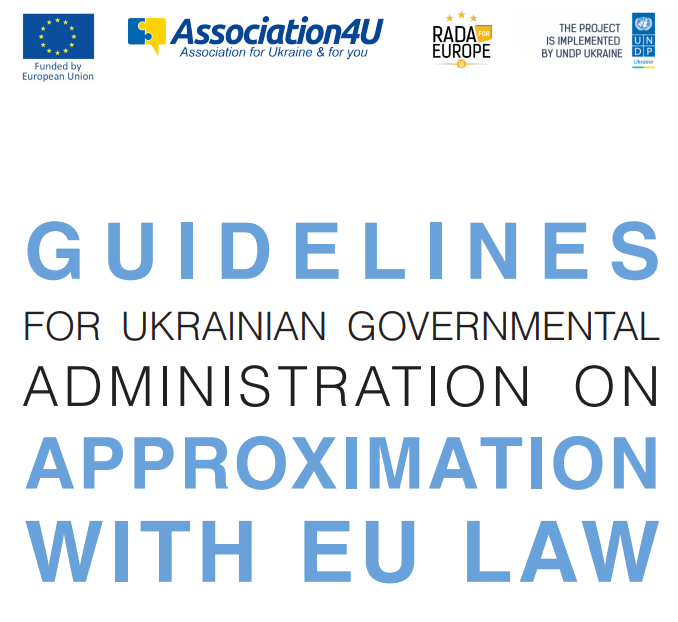 In general, Ukraine is obliged to harmonize at least part of its existing national legislation to hundreds of EU regulations (the so-called "EU acquis") from many branches of law. These include key industries such as customs law, labour law, financial services, consumer protection, environmental protection and many others. Legislative work of this magnitude cannot be carried out in a chaotic and hasty manner and requires careful and appropriate planning. It also requires a very good knowledge of the sources of EU law, its origin, objectives and fundamental principles, as well as a proper understanding of the structure and interpretation of EU law. These Guidelines provide such information in a simple form, with many examples and practical tips for daily work.

They are specially designed for Ukrainian authorities, as well as all those involved in the harmonization of legislation. This document is designed to help both those who are already familiar with the peculiarities of EU law, legal approximation, the legislative process and law-making activities in Ukraine, and those who are at the beginning of this path and meet with its difficulties. As always happens with such documents, some readers will find them very useful and interesting, but others will refer only to individual parts.

The Guidelines consist of a body of text and several annexes.

Section 1 contains information on the obligations imposed on Ukraine to approximate legislation. It looks at the path from a partnership and cooperation agreement to an existing Association Agreement. Particular attention is paid to the "dynamic approximation" provided for in the Association Agreement, as it requires constant monitoring of changes in EU law.

Section 2 provides general information on EU law, its sources and its application at the national level.

In Section 3 of the Guidelines the ongoing consideration of the main theme, that is, the approximation of legislation is considered. Its structure reflects the order of the key activities related to the approximation of legislation. First of all, it analyzes planning, including reviewed Ukrainian practice. Further, the reader has the opportunity to learn about the preparation for the assessment of gaps in legislation, the inventory of the relevant EU law and national legislation, as well as other preparatory steps that need to be performed before the drafting of the legal act. The principles for drafting regulations are also set out in Section 3. Moreover, special attention is paid to the verification of compliance both in the early and in the final stages of the law-making process. The main part of the Guidelines is supplemented by such annexes:

Annex I provides an overview of the current organization of the process of approximation to EU law in Ukraine.

Annex II contains useful information on the preparation and use of conformity tables and certificates of conformity in the format provided for by the legislation of Ukraine.

Annex III (separate document) provides an overview of case law with a list of court cases of relevance to Ukrainian public authorities, as well as a summary of the most important court decisions.

Annex IV includes detailed information on the application of EU law in the EU Member States (which as such does not apply to Ukraine).

Annex V (separate document) contains Instructions on the use of EU law databases. It is addressed to civil servants who are not yet very familiar with the Eur-lex website and the website of the Court of Justice of the European Union (ECJ).

The Guidelines were developed within the framework of the EU project "Support to the implementation of the EU-Ukraine Association Agreement" (hereinafter — "Association4U"), which is implemented by a consortium led by GFA Consulting Group, in cooperation with the EU/UNDP project "Rada for Europe: capacity building in support of the Verkhovna Rada of Ukraine" and with the consulting support of the Government Office for Coordination of European and Euro-Atlantic Integration of the Cabinet Of Ministers of Ukraine.

The Guidelines (download version in English) were developed with the financial support of the European Union.

The content of the Guidelines does not necessarily reflect the position of the European Union and is solely the responsibility of the experts of the EU Project "Support to the implementation of the EU-Ukraine Association Agreement be" ("Association4U"), the EU/UNDP project"Rada for Europe: capacity building in support of the Verkhovna Rada of Ukraine" and the Government Office for Coordination of European and Euro-Atlantic Integration of the Cabinet of Ministers of Ukraine.